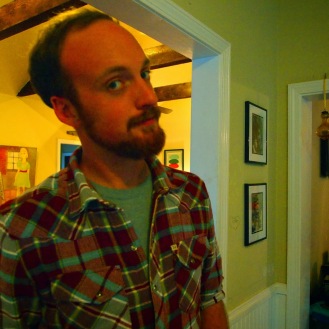 Katherine Webb is the founder of NGMC. She holds an MFA from UNC-Wilmington where she led Teens Out Loud, an arts initiative for HIV positive youth, and coordinated Writers in Action, a program that put dozens of creative  writing instructors in public classrooms. She’s worked as a barista, dog walker, romance novel editor, librarian, adjunct, journalist, ad copywriter, and mother. Her writing has appeared in The New York Times, Arts & Letters, North American Review, Weld for Birmingham, PoemMemoirStory, among others. She’s hitched to Russell.

Russell Hehn lives in Birmingham, Alabama, with his wife, son, and dog. He has a garage out back that turns out furniture and music, a desk inside for bookmaking and story writing, and a little red truck. His writing can be found at the Barcelona Review, McSweeney’s, and Limehawk.

Ashley M. Jones received an MFA in Poetry from Florida International University, where she was a John S. and James L. Knight Scholar. She served as the Official Poet for the Little Free Libraries Initiative in Sunrise, FL, and she was the winner of the FIU Academy of American Poets Prize. She received a 2015 Rona Jaffe Writers Award, and she was a finalist in the National Poetry Series. Her debut poetry collection, Magic City Gospel, is forthcoming from Hub City Press. She is a Creative Writing faculty member at the Alabama School of Fine Arts, and a seminar instructor at the University of Alabama at Birmingham.